The Oregon Coast offers some of the most iconic natural and man-made sights you’ll see anywhere in America. If you want a taste, check out these five places in the central region.

If Haystack Rock looks familiar, it’s probably because you’ve seen it in a movie. Filmmakers used this iconic monolith in three major movies; Twilight, The Goonies and Point Break, as well as many lesser-known films.

Over 750,000 people visit Cannon Beach each year to enjoy this sprawling beach and massive rock. The area is now a protected marine garden, and the perfect place to explore Oregon Coast tide pools.

Cannon Beach earned many accolades over the years, because of its stunning beauty. It’s listed as one of America’s best beaches, and in a 2013 issue of National Geographic included it as one of the world’s 100 most beautiful places.

Named for the hammer-wielding Norse god who controlled thunder, lighting and storms, Thor’s Well is an iconic Oregon Coast sight worthy of photos. It’s one of those seemingly impossible places you must see to believe.

This massive sinkhole near Yachats, Oregon looks like Thor’s hammer struck a large hole in the jagged rocks. Sea water pours into it, yet it never seems to fill. During the winter and at high tide you’re in for a spectacular show, but don’t get too close. Its 20 feet deep and a bubbling cauldron you’re unlikely to survive should you fall in. Grab you camera and sit back safely on the cliffs as the sun sets.

Cape Meares State Scenic Viewpoint offers unsurpassed West Coast views, a lighthouse, and a very unusual tree. This huge Sitka spruce is around 300 years old, but no one precisely why it grew the way it did or whether some planted it. One thing is sure; it isn’t like most other trees.

Instead of a central trunk, this tree has many. Its’ odd shape earned it other nicknames including the Monstrosity Tree, because its’ gnarly branches definitely looks like something out of a horror movie. There’s plenty of speculation about its unusual shape. Some say Native Americans deliberately created the cage-like structure for ritual purposes. Others say it’s just an example of one of Mother Nature’s zaniest moments. Decide for yourself.

The Oregon Coast certainly has unrivaled natural beauty, but it also has a few man-made attractions too. The 99W Drive-in Newberg is one of them. It is one of four drive-in movie theaters in Oregon. Only about 300 exist in the entire United States and it was voted number one in the country in a USA today poll.

A visit to the 99W Drive-in draws you back to simpler times. You didn’t just go to the drive-in to watch a show. You drove outside of town and met up with friends. There was a buzz in the air on a warm summer night and something special about watching from the privacy of your vehicle. Pillows, blankets, pajamas and popcorn were all okay. If you want to relive this iconic past-time, arrive early. The place is very popular.

No one can say that Oregon’s boring. The Prehistoric Gardens in Port Orford are home to a life-size dinosaur park. This unusual venture began with E.V. Ernie Nelson, a talented sculptor and dinosaur aficionado.

Nelson researched the dinosaurs thoroughly and then built the park over three years. The gardens opened in 1955 and Nelson made 23 accurate replicas of dinosaurs over the next 30 years. The Brachiosaur is 86 feet long and 46 feet tall and took 4 years to complete.

Today you can visit the park and enjoy a self-guided tour through natural rain forest. The trail is fully accessible and you can bring your dog too. It’s the ideal place to entertain children or just for a short reprieve in an idyllic setting.

These are only a few of the amazing sites the Oregon Coasts offers. Avoid hotels and choose to stay in one of our well-appointed vacation condos in the Depoe Bay and Lincoln City. They’re affordable and perfectly situated so you can explore the Oregon Coast easily. 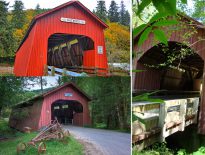