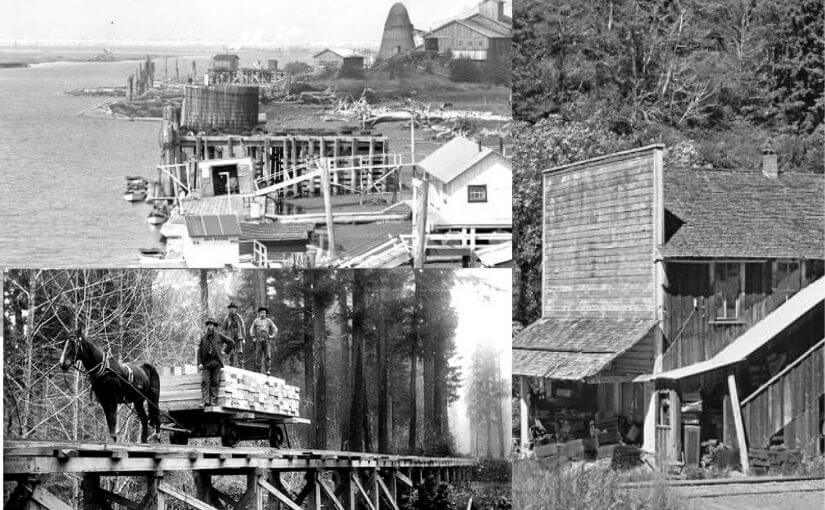 The Oregon Coast has many ghost towns and Oregon has the most in the country. Pioneers poured into the area during the late 19th century for logging, fishing and mining, but not all towns survived.

As the area grew, settlers soon discovered that not all towns met their needs. Here are three Oregon Coast ghost towns that offer a taste of a lifestyle gone by and worthy of a visit.

There are actually two Kernvilles – the old and the new. Nestled just outside Newport, old Kernville still has many buildings that echo times gone by when fishing and lumber defined the town.

The Kern brothers built a cannery on the Siletz River and settlers built a sawmill on the opposite side of the river. During World War I, the war effort demanded milled spruce for airplanes.

Unfortunately, the road on the cannery side of the river turned into a quagmire during the wet winter season. By 1926, the area had a new bridge and residents and machinery moved to the other side of the river, leaving the old settlement behind for good.

Mabel is near Eugene, Oregon and it has many buildings you can see. Pioneers settled in the area in 1890, because of the large stands of Douglas fir. They built a sawmill on Shotgun Creek and within 7 years the town was the third largest in Oregon so they also needed a post office. “Mabel” was the daughter of the postmaster. The town also had enough children to merit a school.

Mabel thrived during World War I because of the demand for lumber. However, by 1957 the post office closed and the residents used the school as a grange for farmers to sell their goods. You can visit the structure which retains the heavy wood panelling and wood stoves. It’s easily accessible and free to visit.

Technically, Chitwood isn’t a true ghost town – it does have a few residents. Driving from Corvallis to Newport, you’ll see one of the finest examples of a covered bridge in the area and a true “feel” of what it was like to like in the area in the late 1800’s.

It’s heavily wooded and close to the Pacific Ocean. When the town began, it grew quickly. They built a school, and the Corvallis and Eastern and later the Southern Pacific railroads stopped there. It was a vital hub for the area, moving goods and passengers along the Oregon Coast.

The Chitwood Covered Bridge still stands, and it’s on the National Registry of Historic Places. However, the grocery store burnt down, they tore down the train station, and the general store feel into disrepair. The bridge sits on private land, but the public can access it freely.

Countless ghost towns exist in Oregon and these are just three on the coast. If you love history and adventure, use one of our scenic coastal vacation homes as a starting point to scour the entire area.

Why stay in a stuffy hotel when you can enjoy panoramic views of the Pacific, all the conveniences of home, and an affordable price? 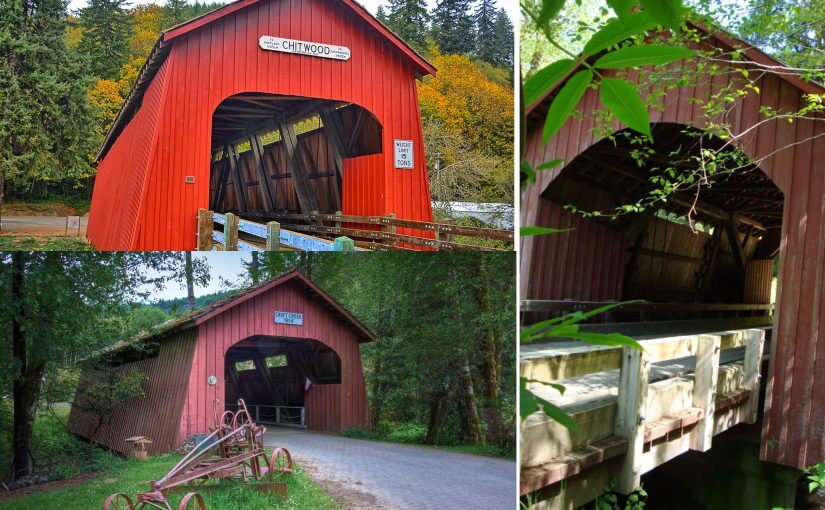 In the late 18th and early 19th century, people travelled many miles to see them, write about them, and sketch them. These iconic structures still draw visitors from around the globe, because they’re truly unique and demonstrate the ingenuity and fortitude of early American settlers.

The earliest Oregon covered bridges are from the 1850s, but most sprung up between 1905 and 1925. Builders used the abundant Douglas fir of the area because its long spans suited bridge construction. Covering the bridges protected them from rot from the wet Oregon climate.

In other parts of the country, the covered bridge fell aside when builders started to use iron in the 1860s and ’70s. By the 1920s and 1930s, most bridges were concrete and steel. These three covered wooden bridges bucked the trends and are available to view on the Oregon coast today.

You can find the Chitwood Bridge 17 miles east of Newport on Highway 20. You’d never know that Chitwood was once a bustling town with stores, homes, a post office, a dance hall and a railway station. Steam locomotives used to stop here on their trip from Yaquina to Corvallis to take on passengers, freight, water and fuel. Today it is a ghost town.

The 96 foot covered bridge was built in 1926 and restored under the federal National Historic Covered Bridge Preservation Program and Lincoln County in 2014. The bridge now has a new roof and siding and a new coat of bright red paint. The restoration also included extensive structural repairs.

The Drift Creek Bridge has a colorful history. It was built in 1914, just south of Lincoln City. Even though officials designated it a historical memorial to the Lincoln County pioneers, it fell into disrepair. It was eventually condemned and dismantled in 1997. The County gave the timbers to a local family who own land only eight miles to the north of the original site.

Today the resurrected covered bridge frame stands in a beautiful, park-like setting on private land. The property owners granted an ongoing public easement for heritage purposes. The bridge belongs to the county, but the property owners maintain the bridge. You can access it through Bear Creek Road off Hwy. 18.

The Yachats Bridge spans the North Fork River. It was built in 1938 and rehabilitated in 1989. It also has an interesting history. First, the community removed the roof to allow a mobile home into the area in the 1980s. Later, a fuel truck crashed through a bridge approach. The 1989 rehabilitation included replacing the weakened approaches as well as trusses, siding and the roof.

Currently, plans are in the works to rehabilitate the bridge again through the National Historic Covered Bridge Preservation Program. Once completed, the $665,000 plus project will include replacing key components, siding, rail, and paint. The bridge is 7 miles east of Yachats River Road and then 1.5 miles north on N Yachats River Road.

If you’re interested in covered bridge, two more exist at Five Rivers and Sandy Creek. There’s no need to stay in stuffy hotels while you explore these architectural marvels. Our well-appointed Lincoln City and Depoe Bay condos offer ocean views, affordability, and convenience as you explore the Oregon Coast and its heritage treasures.