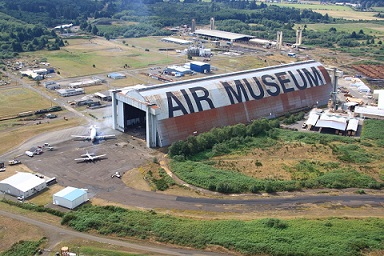 The Tillamook Air Museum offers a unique glimpse into the history of war aircraft. You can see everything from a P51-Mustang to a Bell helicopter, and everything in between.

You can climb into a jet simulator or visit the largest wooden structure in the world - a rare World War II blimp hangar. The building is so large that they measure it in square acres, not square feet. There were originally 17 wooden hangars around the U.S. coastlines for K-class blimps used for antisubmarine coast patrol and convoy escort. This is one of the few remaining.

The museum also houses antique fire trucks, a Willy jeep and even a 1931 Ford AA. The exhibit hall features rare aviation and war artifacts. See a piece of the Hindenburg or flight jacket from the German Luftwaffe. The museum usually hosts an air show during the summer months too.