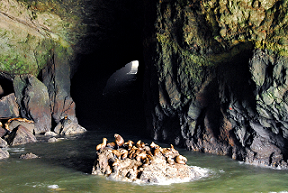 The Sea Lion Caves just north of Florence, Oregon are America’s largest as identified by the Guinness Book of World Records. It’s a privately owned wildlife preserve and bird sanctuary and part of the Oregon/Cape Perpetua Marine Reserve.

The caves formed several thousand of years ago and are as high as a twelve-story building inside. Sea lions come and go at will here, because it’s a natural habitat.

The Steller sea lion is the primary resident, and during the winter months there can be hundreds here. Also known as the northern sea lion, the males are far larger than the females and they have a thick mane of coarse hair. When spring approaches, the sea lion’s breed and move out to the rocky ledges outside of the Cave. They reside here throughout the summer. They feed on fish such as cod, herring, mackerel, and salmon, as well as squid and octopus.

The average herd in the Sea Lion Caves region is around 200, so you’ve a good chance of seeing them up close. You may also see bats, whales, eagles, and owls or many other forms of wildlife including seabirds only found on the Oregon Coast. To visit the Cave you travel quickly down an elevator for 208 feet. You must also be able to traverse 37 steps to reach the outside trails.