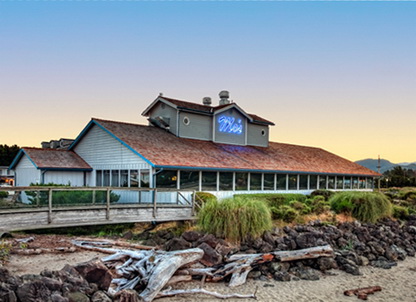 Mo’s Restaurant is best known for one dish - clam chowder. It’s so famous that customers demanded the restaurant offer it for takeout. They’ve served millions of bowls over 50 years and now they sell it by the quart and ship it by Fed-Ex! All you do is add milk and serve.

Despite its’ popularity, the atmosphere of Mo’s is still the same. They ship 500,000 pounds of clam chowder out each year, and they still serve it in the restaurant, just as Mohava Marie Niemi (Mo) did when the restaurant opened in 1946.

Over the years, her good food and flamboyant personality attracted dignitaries and movie stars. She met Paul Newman, Joanne Woodward, Henry Fonda, and Lee Remmick during the filming of Sometimes A Great Notion. Senator Robert Kennedy took a couple of buckets of chowder with him after he left Newport in 1968. In 1999, Mo’s Clam Chowder was a featured entrée at the Smithsonian Institute. There’s 7 Mo’s around the state, including one at the Portland International Airport and they offer other dishes too.